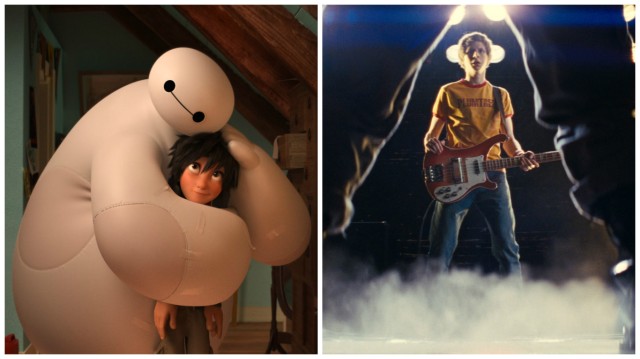 If, by any chance, you have been occasionally checking in on my film writing over the past few years, you might have noticed that I have a weakness for lists. Every year, I look forward to December, when the time once again comes to go through what I’ve seen throughout the year and to then choose my top ten movies of that period (while we’re on the subject: 2011, 2012, 2013, 2014, 2015, 2016).

So it might not come as a surprise that there is a special place in my mind for the year 2019 – the year in which, hopefully, I will get to pen two lists; my take on the best of 2019 and my round-up of the decade’s standout works. Fully aware that this is not the most reasonable or urgent preoccupation to entertain in the early days of 2017, I nevertheless compiled a longlist of potential contenders for the latter collection as well as a year-by-year rundown of what I have to catch up on recently. In other words, I’m always on the lookout for list material these days.

Now, the other day, I watched two movies I hadn’t seen in years. The first was Big Hero 6, Disney’s loose animated adaptation of the eponymous Marvel comic series. Even though the film, revolving around teenage robotics genius Hiro and the huggable healthcare robot Baymax, was the highest-grossing animated production of 2014 and won the 2015 Oscar for Best Animated Feature, it seems to have failed to make a lasting impression on pop-culture in the way, say, Frozen or even Pixar’s Brave have.

The second was another comic book adaptation – Edgar Wright’s Scott Pilgrim vs. the World, one of my favourite films of 2010, and one which I was anxious to revisit in order to see whether, some six years after my first viewing, it still holds up. Like Big Hero 6, the video game-influenced romantic action comedy about the titular Scott’s fight against the seven evil exes of the woman he wants to date, directed by the creator of Shaun of the Dead and Hot Fuzz, isn’t the subject of a lot of cinematic discussion these days. It came, garnered many a glowing review, and went, seemingly, without leaving much of a pop-cultural footprint – and without making its money back.

Even when debating the pros and cons of flashy visuals and intermedial stylistics, writers seem more eager to focus their attention on Zack Snyder’s aesthetically likeminded yet critically panned Sucker Punch (2011) – perhaps because Snyder (Man of Steel, Batman v Superman: Dawn of Justice) continues to dominate American blockbuster cinema through his involvement in the DC Extended Universe, while Wright’s most prominent projects since Scott Pilgrim have been limited to the little-seen comedy The World’s End (2013) and a temporary stint at the helm of Marvel’s Ant-Man (2015). 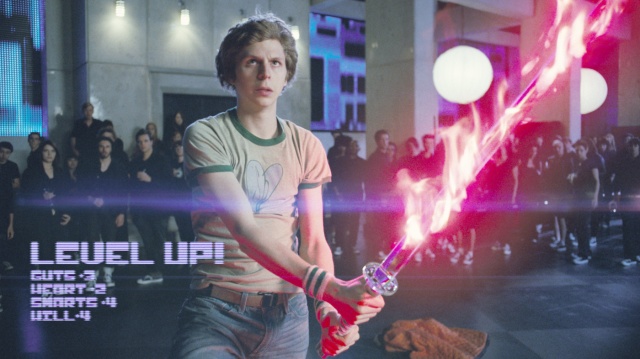 By now, you might be wondering where I am going with this. But bear with me: there is (I think) a larger point to this article than me talking about my predilection for lists and two films I saw recently. About a month ago, I read Film Crit Hulk’s piece on Damien Chazelle’s Oscar favourite La La Land. It’s an excellent essay by what is probably film criticism’s best reader of cinematic language working today – and I also happen to disagree with many of the issues he raises, most of all his theory of how cinematic functionalism dictates a movie’s cultural impact:

“I mean, there’s a reason why 2013’s Frozen, Gravity, and Her linger in our cinematic lexicon, but no one ever really thinks about American Hustle anymore. The movie’s problems are clearer now, but it didn’t work then, either. It was just too easy to look at and see ‘filmmaking!’ and enjoy its airless frivolity, but in terms of deep function it was all empty calories. It wasn’t even about anything. Every award season I feel like we go through this. Like right now, I can make a host of arguments as to why no one will think about Jackie after this winter and they all have to do with startlingly poor function vs. impressive texture. Because ultimately, functionalism is what makes things stick.”

I see where he’s coming from, and there is definitely an argument to be made in favour of functionality being of vital importance to what is deemed “quality” cinema. However, this attitude also strikes me as slightly reductive, as it assigns value to films that form a neat whole – disregarding the potential of jarring, confrontational works that deliberately paint over the lines. Ultimately, such a conception of what constitutes good filmmaking all too quickly turns into a self-fulfilling prophecy, where a movie’s quality is governed by whether it is still widely referenced and talked about (something that is subject to a whole host of influences that transcend storytelling and aesthetics, such as media coverage and perceived timeliness). Again, there is truth in such a viewpoint, but one should be wary of translating it into a yardstick for what constitutes noteworthy cinema. To this day, I remain convinced that, as a nihilistic war satire, the comparatively obscure The Dirty Dozen (1967) works where the cult classic Catch-22 (1970) fails – to name just one example. 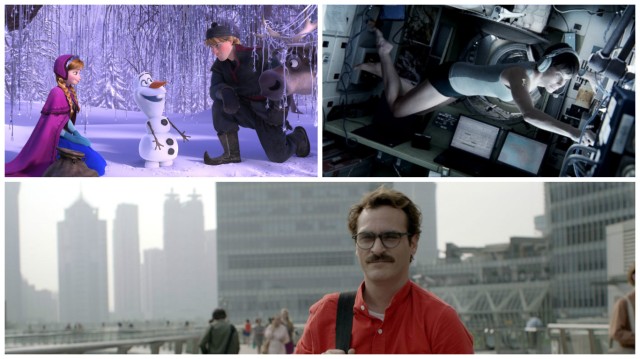 This brings me back to our comic book double feature. From where I’m standing, I can’t see either movie having “lingered in our cinematic lexicon” to an extraordinary degree. While Scott Pilgrim may have had a short-lived afterglow in the form of Sucker Punch, the kind of game it plays with post-production gimmicks – split screen, on-screen narrative text, visualised sound effects, and so on – hasn’t really caught on. Big Hero 6, meanwhile, hasn’t been able to make its mark on the superhero genre, all but disappearing in the past decade’s abundance of similarly-themed movies.

By the logic of cinematic functionalism, this would suggest that neither work is worthy of being included in the canon. And I guess you could justify that by pointing to how Wright’s onslaught of stimuli leaves you breathless and exhausted by the time the credits roll. By citing Big Hero 6‘s sporadically hokey script and its reliance on a well-worn genre plot. But even acknowledging these minor blemishes, I would still argue that these two films are deserving of being named among the decade’s best so far (yes, the detour via my love of lists also had a point).

Never mind that Scott Pilgrim is one of the most tonally faithful adaptations I know. Never mind that it features memorable supporting performances by people who would go on to become household names (Chris Evans, Aubrey Plaza, Brie Larson). Never mind that its hilarious quickfire dialogue anticipates a lot of the ironically idiosyncratic cadence that has become a hallmark of Buzzfeed and Twitter. Never mind that all of its narrative levels are in constant conversation with each other, which makes it the perfect film for the age of multitasking. 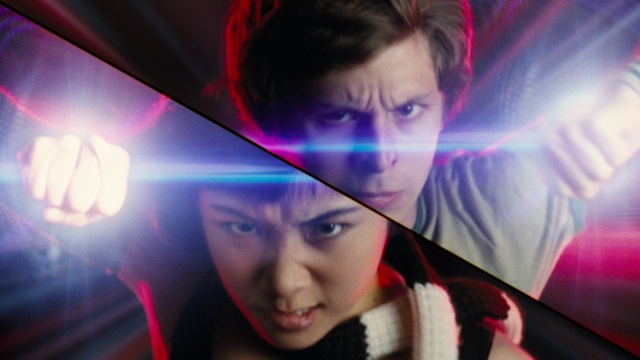 On a purely aesthetic level, it ranks as a truly visionary piece of cinema. Its fight scenes are brilliantly choreographed, injecting the video game sensibilities so many video game movies sorely lack; its insistence of flooding its images with such an array of visible humorous detail challenges the very convention of watching something with undivided attention, forcing the viewer to either let her or his eyes dart across the screen in every scene or admit defeat and commit to a second viewing. This is anything but functional, as it creates an enormous capacity for audience frustration – but it’s bold and challenging, making Scott Pilgrim a supremely rewatchable film.

On the other hand, Don Hall and Chris Williams’ Big Hero 6 may not quite offer the perception and the cheek of Wright’s firework of a movie. It succeeds in a different area: it reminds us that, even with the current level of CGI technology, it’s still animation that is best equipped to depict the seemingly impossible. As much as I enjoy live-action superhero movies – at least those of the Marvel variety –, I don’t think I ever felt more invested in the action than I did while watching Big Hero 6. It stands out of the genre because it is animated, because it is not faced with the clash between real people and computer-generated abilities. You wouldn’t think it makes much of a difference, but it does.

Although most people, myself included, won’t have any knowledge of the comic franchise the film is based on, seeing Hiro, Baymax, and their friends – outstanding characters in their own right – suit up halfway through the movie and set out to do what heroes in spandex do is exhilarating not only because it is staged so well, but also because it doesn’t require the suspension of disbelief an Iron Man or a Batman v Superman requires. Coupled with a wonderful example of 2010s animation’s perhaps most underrated discipline – urban architecture (see The Lego Movie and Zootopia for further reference) –, the beguiling cultural hybrid San Fransokyo, this makes Big Hero 6 the decade’s best, most satisfying superhero movie.

As much as I would like to conclude this little essay in a neat and clever way, I don’t think that that’s possible. Inspired by an unexpectedly poignant double feature, I sought to highlight two films that seem to have slipped through the cracks of cultural memory and which, I would argue, are shining examples for the fact that not all that is forgotten deserves its fate. Make of that what you will. If it prompts someone to (re)watch Scott Pilgrim or Big Hero 6 – two of the best films of the decade –, I have achieved my goal.

If you want to read more from me – albeit in German –, head over to FacingTheBitterTruth.com and Maximum Cinema!