Perhaps the hallmark of a great movie is that you don’t know where to start talking, or writing, about it. In animation, this distinction most often befalls the creative outputs of two major studios – Japan-based Studio Ghibli and the Californian Disney subsidiary Pixar. Last year, the former production company produced two such eminent films, with Hayao Miyazaki’s The Wind Rises and Isao Takahata’s The Tale of Princess Kaguya ranking among the finest releases of 2014. Pixar did not make an appearance in cinemas that year, opting instead for a double-headed box office offensive in 2015, with Inside Out and the upcoming The Good Dinosaur, scheduled for a November opening.

It is difficult to look at Inside Out without at least acknowledging the media narrative that has surrounded it since its US release in June and that has been built around Pixar since its unanimously acclaimed Toy Story 3 came out in 2010. Most commentators agree that post-Toy Story 3 Pixar has been one of continued, if erratic, decline. In 2011, Cars 2 became the studio’s first outright critical flop; 2012’s Brave was widely described as being “just okay” because of a perceived weakness in plot; while 2013’s Monsters, Inc. prequel Monsters University was given the inevitable label, “not as good as the original”.

And although it may be true that none of these films gave me pause like Pete Docter’s Inside Out – or The Incredibles, or Ratatouille, or WALL-E, or any of the Toy Story entries –, I still find many critics’ retroactive treatment of them highly suspect. In the mission to elevate Docter’s latest to the status of a “Pixar great” as dramatically as possible, both Brave and Monsters University (I did not see Cars 2) have been exploited to suit a certain narrative – namely that they should be seen as stepping stones without much value in and of themselves. This is conveniently ignoring that Brave stands tall as a gorgeous milestone of animation and that Monsters University would be able to hold its own on any given list of the best and funniest college comedies of all time.

That said, however, Inside Out is markedly of a different caliber – more coherently crafted than Brenda Chapman’s and Mark Andrews’ feminist Scottish fairytale, more ambitious than Dan Scanlon’s prequel. Its premise alone is an indication of that: set in the mind of 11-year-old Riley Andersen (voiced by Kaitlyn Dias), the movie’s main protagonists are the girl’s anthropomorphised primary emotions – Joy (an infectiously energetic Amy Poehler evoking her performances as Leslie Knope on the NBC sitcom Parks and Recreation), Anger (a pitch-perfect Lewis Black), Sadness (Phyllis Smith), Disgust (Mindy Kaling), and Fear (Bill Hader with immaculate comedic timing).

This ragtag team of feelings have been with Riley since birth, guiding her safely through the perils and turbulences of early childhood, from dangerous electrical sockets to broccoli. But at the outset of Inside Out, they are faced with their greatest challenge yet: due to her father (Kyle MacLachlan) changing jobs – it is implied that he tries to get a Silicon Valley startup off the ground –, the Andersen family relocates from Minnesota to San Francisco, which means that Riley, at the very beginning of her formative teenage years, has to leave behind her familiar environment – her school, her friends, her ice hockey team – and come to terms with new surroundings. 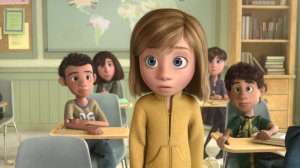 In these early scenes, where we see Joy, Sadness, Fear, Anger, and Disgust act out their daily routine, faced with the depressing realities of a dingy new apartment and organic pizza, comedy abounds. Not only do they feature some of the quickest, most densely packed visual comedy Pixar has ever done outside of their trademark shorts, the writing and likely improvisation on the part of the actors also proves to be on-point; stand-up stalwart Lewis Black especially excels at the kind of child-friendly observational tirades that would make The Muppet Show‘s Statler and Waldorf proud. The plot really kicks off when Joy and Sadness find themselves stranded in the long-term memory portion of Riley’s mind, where they meet the child’s long-forgotten imaginary friend Bing Bong (a heartwrenching performance from Richard Kind), leaving Fear, Disgust, and Anger alone at the controls – and Riley with a severe emotional crisis.

Make no mistake, Inside Out remains uproariously funny throughout – some ill-advised gendered humour aside –, translating commonplace ideas and idioms concerning the human mind and heart into wonderfully imaginative set pieces that never fail to entertain. From the centre of abstract thinking and Imagination Land to the Train of Thought and a hilarious running joke about an all to familiar quirk of cognition, Pixar’s colourful rendition of cerebral functions – even if the metaphor of personified emotions governing everyday life does not stretch endlessly – never fails to deliver. But what really comes to the fore as Joy and Sadness make their long, arduous journey back to the control panel is both the creativity of Docter, co-writers Meg LeFauve and Josh Cooley, and the team of animators backing them up as well as the impressive emotional depth of what they conjure up.

Indeed, in terms of message and subtext, Inside Out very probably ranks as Pixar’s most mature effort to date, managing to blend its impeccable sense of cartoonish fun with raw emotional power. Maturing processes, rites of passage, and letting go of the past have featured prominently in Docter’s previous two directing efforts – Monsters, Inc. and Up –, and it does not come as a surprise that these motifs crop up here as well. Like the best films of its kind, Inside Out embraces ambiguity instead of avoiding it, offering a potent take on what it means to grow up. 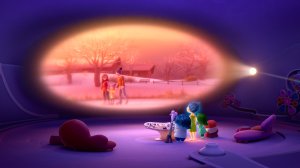 Keeping true to form, this becomes evident on both narrative levels. As Joy has to learn that, contrary to her convictions, there is not only value in the existence of Sadness but that it is in fact indispensable, Riley’s disillusionment with the turn her life has taken does not culminate in a successful return to what has been left behind but in the realisation that disappointment and loss are essential aspects of the human condition. To live is to deal with them; to live is to face tough, even painful decisions – a truth that is poignantly illustrated by the moving scene in which childhood, quite literally, has to be left behind. That Pixar takes this stance on such a fundamental issue is by no means insignificant, as children’s entertainment has a history of preaching eternal childhood bliss to its audience. But Inside Out never skirts the issue, favouring a mature, pragmatic angle without sacrificing any of the magic. Therein lies the brilliance of Pixar.