There is a certain schizophrenia in how Russia is perceived around the world. On the one hand, everybody knows that it’s the largest country on earth by area. On the other, however, we still adhere to the Soviet-cliché of Russians being one single, faceless bulk of people, whereas reality couldn’t possibly be further from the truth. Russia is, ethnically, one of the most diverse places in the world. But sadly, the cultural heritage of many of these peoples – traditions, languages and identity itself – is in danger of disappearing, due to aspects like nationalism, globalisation, and apathy. In Silent Souls (original title: Ovsyanki), director Aleksei Fedorchenko metaphorically chronicles the impending downfall of one of those cultures: the Merya, a people of Volga Finns, whose population of European Russia predates Christian settlement. It’s a haunting, dream-like and personal story which, unfortunately, is a tad too self-righteous for its own good.

When Tanya (Yuliya Aug), the young wife of Miron (Yuriy Tsurilo), dies, he asks one of his co-workers, the hobby-writer Aist (Igor Sergeev), to help him give her the last rites. According to Merya tradition, a body has to be washed, burned and its ashes scattered in the water, Meryan people’s holiest element. Miron decides to say goodbye to his beloved “Tanyushka” at the place they were on honeymoon together. So he, Aist, Tanya’s body (no coffin) and two yellowhammers pile into a car and make the journey to the provincial hinterland of the Kostroma Oblast. During that trip, Miron indulges in the ancient Meryan tradition of “smoking” – divulging intimate details of his married life to other people.

There is a profound beauty in Silent Souls that cannot be overlooked. This is not to say that the film is particularly cheerful, or even positive. It is embossed with the basic melancholy of its two main characters; their personal tragedies – Miron lost his wife, Aist sees “his” country losing its cultural identity – resonate throughout it. And yet, Aleksei Fedorchenko manages to elicit something cardinally gorgeous from all that sadness. A big part of this is of course Mikhail Krichman’s cinematography; his depiction of central Russia covered in snow and veiled by November mists is the perfect visual underscore for the two men’s journey. Another component is Andrey Karasyov’s solemn soundtrack. But probably the major reason for Silent Souls‘ incredible beauty is Fedorchenko’s script itself. The film is told by Aist, whose literary language, though prosaic, possesses some supremely lyrical characteristics. For instance, he creates a veritable poetic leitmotif when describing his father, a slightly off-beat writer and Merya traditionalist, as “a codger, an autodidact” – a description which resurfaces several times. 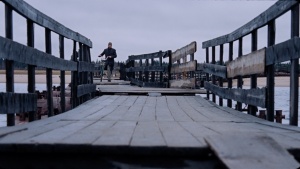 If you’re not a friend of slow-moving cinema, then Silent Souls is not your kind of movie. The long shots and the measured pace work in the film’s favour, and recall films by Andrei Tarkovsky. Sadly though, Fedorchenko does not excel at putting across his story entirely convincingly. He’s developing an uncommon roadmovie around a theme in the vein of Aki Kaurismäki’s Calamari Union or David Lynch’s The Straight Story. Silent Souls is neither as philosophical nor as recondite as he thinks it to be. It’s a minimalistic and simple story about love – be it for a person, for a nation, or even for an idea – and the unavoidable loss thereof, all in view of the Meryan culture, whose highest entity isn’t god but the concept of grace of charity. While this certainly is a compelling tale, Fedorchenko regrettably added an incongruous sense of grandeur trying to convey a deeper, more meaningful, more transcendent message than there actually is. This is perfectly illustrated in the rather rushed and shoddy climax where the subjects of life, death and fate are awkwardly ushered in in order to give the film additional weight.

Silent Souls is, if anything, a fascinating piece of Russian magical realist cinema. It succeeds on many levels and may well be seen as an important contribution to saving the Meryan culture, which itself is enormously absorbing. But it is unfortunately weighed down by its director’s ego, and an ending which shoots completely off target and offsets the whole carefully constructed atmosphere of the film. However, despite being anything but an altogether satisfying experience, it is definitely worth your attention and time.

One thought on “Review: “Silent Souls””