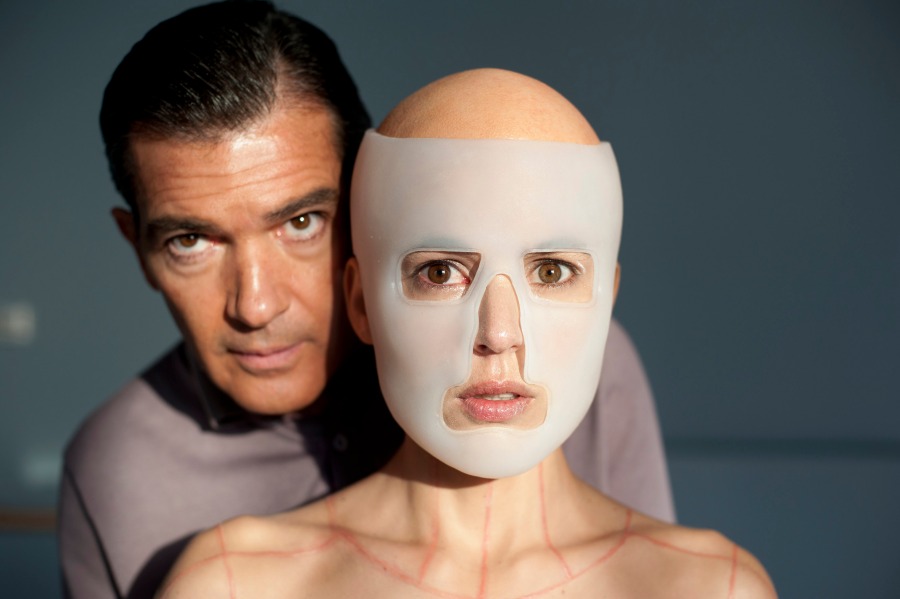 If you know any important contemporary Spanish-speaking film director, chances are it’s either one of the three big Mexican names – Alfonso Cuarón (Harry Potter and the Prisoner of Azkaban, Children of Men), Alejandro González Iñárritu (Babel, Biutiful) and Guillermo del Toro (Cronos, Hellboy) – or the great Spaniard himself – Pedro Almodóvar, writer and director of films like Mujeres al borde de un ataque de nervios (English: “Women on the Verge of a Nervous Breakdown”), Todo sobre mi madre (“All About My Mother”) and Volver. So it comes as no surprise that his latest, La piel que habito (“The Skin I Live in”), has been eagerly awaited by audiences, not least because of Antonio Banderas’ involvement in the project – his first appearance in an Almodóvar film since 1990’s ¡Átame! (“Tie Me Up! Tie Me Down!”). The waiting has paid off: La piel que habito is a vibrant psychological thriller with a beautiful, sleek look.

Toledo, 2012: widower Robert Ledgard (Banderas) is a successful plastic surgeon, who has studied the human skin for years in order to perfectly duplicate it artificially. To achieve his goal he ignores biology’s and medicine’s ethics concerning human inviolability. He even keeps a human test subject in his fort-like house/hospital; gorgeous Vera (Elena Anaya), who has to wear a skintight jump suit all the time and who is not allowed to leave her room. Things get messy when Zeca (Roberto Álamo), the son of Robert’s housekeeper Marilia (Marisa Paredes), stops by while fleeing police capture. His arrival causes a chain of events that is closely linked to one that took place six years earlier when Robert’s daughter Norma (Blanca Suárez) met young Vicente (Jan Cornet) at a wedding party. 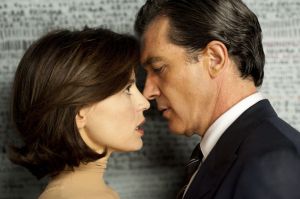 La piel que habito is one of those films that require you to be as oblivious to the plot as you possibly can. Its trailer, though brilliant, did a perfect job at keeping any actual information about the film from you. Knowing too much about it would only lessen its impact, its suspense. Seeing all the levels of the film unfold – and there are a considerable number of them – is a great pleasure. The many layers are intertwined with McGuffins and red herrings, all applied with a Hitchcockian expertise reminiscent of Vertigo or Rear Window, which makes this film a very unpredictable one, one that can take any turn at any given moment. These fascinating and exciting plot devices are spiced up with subtle body horror (still graphic enough to shock and maybe even disturb some viewers) inkeeping with Spain’s controversy-loving post-Franco film industry, well-placed outbursts of violence and a terrifically dark underlying tone – all elements that evoke memories of certain works by David Cronenberg. However, Almodóvar adds his own unique sense of aesthetics to the whole affair – also thanks to cinematographer José Luis Alcacine’s outstanding effort – making it impossible to avert your gaze even for one second if you’re along for the ride. 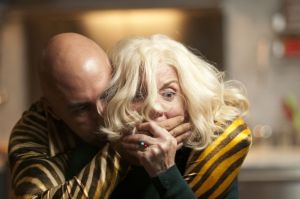 Almodóvar also proves once again what a master of direction he really is; pacing and rhythm are pitch-perfect, best illustrated in the chase scene in the second act where imagery, speed and music (Trentemøller’s “Shades of Marble”) consummately interlock. The great script, staging and cinematography are backed up by an excellent cast led by the unbelievable Antonio Banderas – heavily cast against type. His performance is a perfect metaphor for the whole film: unpredictable, scary, intense and even somewhat starry-eyed. He’s not a Hollywood beau here but a sad, tortured, obsessed man whose complex psyche we are thrilled and privileged to explore. But he’s not the only one who shines: everyone involved is an emotional powerhouse; the enormous energy (sexual and otherwise) that emanates from all the characters is palpable in every scene. Don’t believe it? Just wait for the Vicente subplot to unravel.

There might be people who accuse the film of being overly artificial and contrived. It’s true that Almodóvar’s latest work is no exercise in analysing a life-and-death struggle in a callous urban setting like Alejandro González Iñárritu’s Biutiful earlier this year was; it’s not even particularly realistic. In this respect, La piel que habito will certainly split audiences: either you accept the premise and get swept away by the film’s sheer suspense, or you don’t. If you do, you will be rewarded with narrative, fictional cinema at its most enthralling. It’s a dark, sexy, and even slightly twisted film – love it or hate it. As for me, put me down under “lovers”.