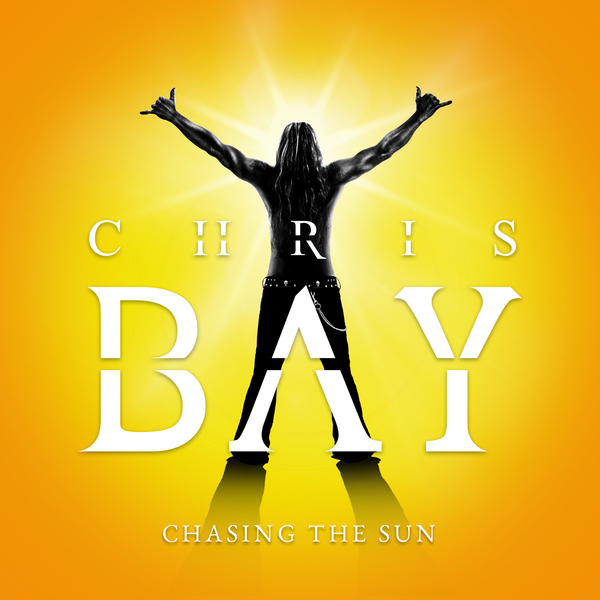 Chris Bay may be the frontman of a highly successful German metal band, but no one ever really doubted that he is a child at heart. If anything, his PG-rated metal act is living proof that this kind of music is not just for angsty teenagers and middle-aged bikers, but, as Freedom Call proudly proclaims, “for everyone”. But what happens when you take the shredding dress away and dig down to a more barebone sound? Bay’s first solo effort Chasing the Sun gives us a glimpse.

Two singles, “Radio Starlight” and the far superior “Hollywood Dancer”, appeared before the official release of the record on 23 February, and they already signaled rather clearly which direction Chasing the Sun would go. The album presents mostly pop rock, leaning heavily on catchy melodies and covering up otherwise generic compositions with mostly quite fun synth passages.

“Hollywood Dancer” was the second single to be released from Chasing the Sun. Despite being a decent song, it featured a rather embarrassing music video, ironically shot in the streets of Tokyo.

With the first beat of the opening track, “Flying Hearts”, Bay’s trademark optimism shines through. The overall feel of the album is clearly uplifting. Fans of Freedom Call will not find many surprises on this record, as it pretty much treads the same path as the band, albeit more lightly as far as the arrangements go.

In contrast, the lyrics are a distillate of what Bay has done in the past. And for the most part, that is a bad thing. In recent years, you could track Bay’s tendency of writing increasingly simple-minded lyrics for Freedom Call. On this record, there’s hardly any nuance. Bay clearly tells it as he thinks it – and sometimes that results in inane lyrics such as the opening line from “Radio Starlight”: “I sing a song for you and everyone, la la la la la la la”. There are several of these cringeworthy lines and rarely any outstanding ones, highlighting that Bay’s biggest weakness appears to be his ability to express himself with words without bordering on the ridiculous.

While “Radio Starlight” may not be a particularly strong track from Chasing the Sun, it is certainly a very representative one and therefore a decent choice as the first single.

That’s a shame, really, because overall, the man’s musical talent shines through even when he’s making pop. Perhaps it also highlights that his sensibilities have to be offset to a point by a metal band. And not surprisingly, the biggest exception to the pop approach is also the strongest track on the album. It plays towards the end of the record and goes by the dreadfully spelled name of “Bad Boyz”, a song that some reviewers have likened to Duran Duran, which isn’t a bad point of reference.

One thing that we have to commend Chris Bay for is that despite abandoning the metal style for this project, he does at no point appear disingenuous. If anything, this album seems to capture the essence of Bay’s style much more uncompromisingly than any record by Freedom Call. It also isn’t a blatant attempt to appeal to a broader audience by going pop. This simply appears to be the kind of music that the man would make all the time if he didn’t happen to have founded a metal band.

And this brings us to the vital question of who this album is for. It appears that it isn’t for fans of Freedom Call or metal, or even pop. It’s not so much about generic conventions or even fandom – despite the fact that any artist going solo is probably relying heavily on existing fans buying the record. Rather, Chasing the Sun was made for people like Chris Bay himself. Anyone who cares very little about pretensions or conventional notions of genre, who’d rather lay their hopeful sensibilities bare at any opportunity, would probably have a great time with this record. Clearly the man loves what he does and there is a certain charm to that. I could see Bay himself putting on Chasing the Sun to get pumped before a show, be it with his band or a solo act. Good for him.