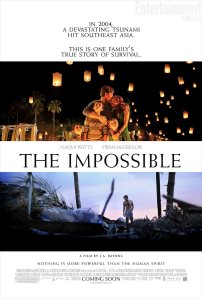 When adapting real-life tragedies and catastrophes, there is always the question of how far fantasy and invention can reasonably take you. Take the 9/11 attacks, which are only now cautiously entering the mainstream cinema canon, and which have inspired movies like Remember Me or Extremely Loud & Incredibly Close. Upon their initial release, many critics felt that these outings have overstressed the limits of artistic license and good taste. From its very beginning, The Impossible, the first big-budget treatment of the tsunami, which devastated large parts of the Indian Ocean’s shores and claimed the lives of at least 230,000 people, is determined not to fall into this trap.

The film opens with a title card telling the audience that the events that are about to unfold are not only based in reality, i.e. the tsunami, but that “this is the true story” of a family whose life changed forever on 26 December, 2004. The writing then fades only to leave behind the words “true story”, as if to anneal them into the viewers’ memory and to stop anyone from ever questioning the chain of events’ integrity and from ever thinking that an auctorial force (namely screenwriter Sergio G. Sánchez) tampered with the sheer incredibility of the story.

The Impossible finds the Bennetts, a Japan-based British family of five – its real-life equivalent is Spanish – on their Christmas holiday in a popular Thailand resort. The characterisations we are given are, at least initially, paper-thin: father Henry (Ewan McGregor) is a slightly obsessive-compulsive insurance agent with a little too much passion for his job – actually, neither trait is substantially brought up after the introduction, except maybe in his desperate insistance on finding his family. His wife Maria (Naomi Watts) is an anxious doctor on a prolonged sabbatical, while their sons Lucas (Tom Holland), 13, Thomas (Samuel Joslin), 7, and Simon (Oaklee Pendergast), 5, are of that odd, and supremely irritating, disaster movie breed that is able to seamlessly switch between talking like a child and like an adult. After the forceful arrival of the giant wave(s), which is sublimely staged and flawlessly computer-animated, the clique is separated: Henry and his two younger sons are able to withstand the impact in the hotel pool; Maria and Lucas, meanwhile, are swept inland and, with her being severely injured, brought to an overcrowded hospital. 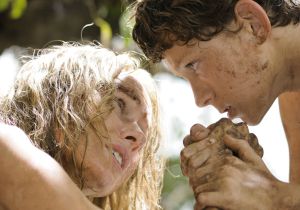 There is a curious tonal and aesthetic quality to Spanish director’s Juan Antonio Bayona’s sophomore piece. After having received international acclaim for his multiple Goya Award-winning horror film El orfanato, he now turns to the more widely appealing realm of the survival drama, in which he proves himself to be surprisingly adept. He skilfully interweaves his plot threads – they diversify as the plot advances; a device that ranks among Sergio Sánchez more successful attempts at dramaturgy –, and in doing so creates a remarkably absorbing narrative that elegantly moves towards its resonating, if inevitable, conclusion. But The Impossible, which retains a Spanish title (Lo Imposible) of equal validity, is marred by the conflict that arises from Bayona’s, and by extension Sánchez’ struggle to harmoniously combine their roots in Spain’s high-brow visceral horror tradition with the demands of the mainstream disaster flick.

The film is ripe with awkward tonal and visual clashes that cannot easily be rationalised away by mere before/after the wave logic. Although it is truly fascinating to behold how the illusion of Maria only having sustained superficial injuries is graphically and, certainly for some people, shockingly shattered, the contrast becomes increasingly hollow and heavy-handed, as Bayona’s dark vision begins to give way to a sunnier, more universally palatable perspective. It is in these instances where the more obvious weaknesses of Sánchez’ lackluster script are at their most glaring, and Bayona’s direction at its most conventional: then and there, the token characters, the trite and stilted dialogue, and the over-pronounced score are no longer minor issues but serious problems in an otheriwse fine movie.

Apart from the undeniably touching third act – in spite of its almost cartoonish way of having the characters miss each other in seemingly plain sight –, a lot has been made of the actors’ performances in The Impossible. Granted, Naomi Watts gives a reliably steady performance, which is helped by some astonishing makeup effects, and Tom Holland manages to rise above his character’s unfortunate tendency to annoy and plays the role with a diligence and a serenity that is indicative of a promising talent. The same cannot quite be said for Ewan McGregor, who does have a few inspired moments but whose theatricality comes close to its breaking point in the much talked about scene in which he fails to hold back his tears after phoning his father-in-law. Still, it is a testament to both him as an actor and the flawed nature of the movie that this scene is perhaps the most honest and emotionally engrossing throughout the whole affair. Finally, a footnote should be reserved for two of the more conspicuous non-Bennett supporting actors: for one, there is Sönke Möhring, whose valiant performance as tsunami survivor Karl would have deserved a more in-depth exploration of his character, even if his diction makes him sound more French than German. For another, Geraldine Chaplin makes a brief but welcome one-scene appearance. She may be forced to talk in clunky metaphors but her experience allows her to turn them into something sweet and wonderful.

In the end, however, The Impossible remains a double-edged sword. While it does not violate the memory of the tsunami victims, it never rings unconditionally true either. It has all the makings of an English-language debut of a filmmaker who already has an acclaimed work under his belt: the cracks in the structure are visible but they do not prove catastrophic because the matter is held together by an affecting and engaging narrative. However, ultimately, one is left wondering how much of that emotion is actually caused by the film, and how much has to be attributed to the knowledge that the Bennetts are stand-ins for a real family.

One thought on “Review: “The Impossible””