In June 2012 the students of the specialized Master programme Multilingual Text Analysis (MLTA) traveled to the Basque Country to explore the mutual influence of multilinguality and language technology. This workshop week is a part of the MLTA curriculum and makes for a nice change from everyday university life.

The first impressions after arriving on Sunday evening were the beauty of the city on the Atlantic coast with the Basque-Spanish double name Donostia / San Sebastian and the students’ idyllic accommodation: “Villa Lazkano”. Had there been a swimming pool, the students might have forgotten that they were in a workshop week. 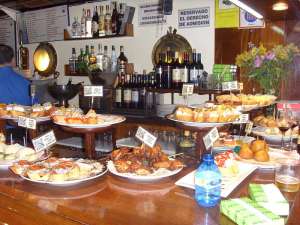 However, the group from Zurich showed up at the applied research center Vicomtech, with which the Zurich Computational Linguistics institute is cooperating in an EU project, on Monday morning. To start the guests learned interesting facts about the characteristics of Basque, an agglutinative language, which today has about half a million speakers, in an overview presentation.

The students from Switzerland had a déjà vu very soon: Like in Romansh, a Standard Basque has been developed from the (seven) different dialects. This Standard Basque unifies the different dialects and is used for writing. But as it is usually the case with such artificial languages: The dialect speakers tend to adopt it very slowly, they feel more comfortable in their dialects.

During the rest of the week the group from Zurich had the possibility to visit further multilinguality institutions: the language school Mondragon Lingua (which is in the process of developing a machine translation system), the research group IXA at the University of the Basque Country (working on Natural Language Processing), the Basque Broadcaster EITB (TV and Radio stations), the dubbing and subtitle company Mixer and the foundation Elhuyar, which promotes the use of the Basque language in science and technology. Also the culture was not missed out: The Swiss group even had time to visit two museums, namely the San Telmo Museum (Basque Culture) and the world-famous Guggenheim Museum in Bilbao.

Filled with many exciting impressions, the students traveled back to Zurich on Saturday. They will think back to the many kind people they met with pleasure. Maybe one day one or the other MLTA graduate will return to the Basque Country. Valuable contacts are now plentiful.