The blurb:
Some nightmares can follow you into reality. Even when they’re not your own. 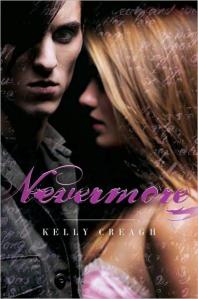 Cheerleader Isobel Lanley is horrified when she is paired with Varen Nethers for an English project. Cold and aloof, sardonic and sharp-tongued, Varen makes it clear he’d rather not have anything to do with her, either. But soon Isobel finds herself making excuses to be with Varen. Steadily pulled away from her friends and her possessive boyfriend, Isobel ventures deeper and deeper into the dream world Varen has created through the pages of his notebook, a realm where the terrifying stories of Edgar Allan Poe come to life.
As her world begins to unravel around her, Isobel discovers that dreams, like words, hold more power than she ever imagined and that the most frightening realities are those of the mind. Can she save Varen from the madness taking hold of him? Or will they both be consumed by the shadows of his nightmares?

First off: this is Young Adult urban fantasy, and I don’t know how many of you are into that. However, in my opinion there are lots of YA books out there which could teach the one or other supposedly ‘adult’ or more mature novel a lesson.

I’m going to admit that my review won’t be unbiased, since I absolutely loved this novel. And not only because of the gorgeous cover. Finally, finally something different! Not that I don’t love reading about vampires, werewolves, fairies and shapeshifters – but it’s nice to be confronted with something new every once in a while. Yes, there are strange, terrifying creatures and occurrences here, but they are of Kelly Creagh’s own design. There is another world, but until the very end it is hard to say in what connection it stands to our own. Is it a different realm? Is it based on Varen’s mind alone, or on the minds of others like him? Is it a dream space? How is it connected to E. A. Poe, whose writings and imagination permeate the entire novel? And who is Reynolds, the ambivalent figure who seems to alternately help and hinder Isobel in her quest to both help Varen and get her own life back on track?

Another thing that I liked is that for once, the main female character is not an outcast but the head cheerleader. I was a bit doubtful about whether the author could make me like Isobel and empathize with her (I’m definitely not the cheerleader-popular-preppy-type of girl), but she did. Yes, Isobel’s got a knack for pink stuff, and she’s rather superficial at the beginning. However, she changes and develops over the course of the novel as her world begins to unravel all around her. Ever since she was paired with Varen and he wrote his number on her hand in purple ink (OMG! Scribbled on by the freak! Eww!) her life has been spinning out of control. She loses her boyfriend (no big loss there, though), her place on the cheer team, her friends, the approval of her parents. She might even be losing her mind. This forces her to extend her mindset and take decisions with far-reaching consequences. She needs to be proactive and figure out what is happening – and how to stop it.

Need more convincing? The supporting characters are also great. Gwen, Isobel’s new friend, has an awesome sense of humor. She is also unforgivingly direct and doesn’t take no for an answer. She sticks with Isobel when she has no one else left, even though they barely know each other. Also Isobel’s younger brother is a great kid and it was nice to see how their relationship changes and develops. And Poe himself is also a character in the book, though he is more of a looming presence in the back of it all. An unanswered and prominent question during the whole book is: how exactly did Poe die?

Then there is Varen himself, of course. Mysterious, gloomy, composed. Wearing far too much black and chains to be in Isobel’s comfort zone. He’s no overdone goth cliché though, and he’s got a healthy sense of humor and self-irony. He’s also tortured and haunted by his own creations as he loses control over his imaginative powers. Of course, all of that makes him Isobel’s father’s and boyfriend’s kryptonite. Plus, how much and in what way Varen cares for her is anything but sure. This is no Romeo & Juliet type of story.

This novel is steeped in Poe and his tales & poems, but not in a way that makes it easy to foresee what is happening. Nevermore is always one step ahead; you’re drawn into the story but you can never guess where it’s all leading. No one really explains things to Isobel, and it’s not one of those situations where you have to bash your head on the desk because the character is just too stupid to figure out what’s going on. Much is left unsolved in the end, which makes is REALLY hard for me to wait for the sequel, which is called Enshadowed  and will be released in early 2012.

All in all? One of those books which absorb you while you’re reading them and haunt your mind and your dreams while you aren’t. Thankfully, it’s about 550 pages, so there’s a lot of it to feast on. Kelly Creagh has great talent for creating atmosphere and making the characters and places appear real to you.
The novel also made me buy a big, fancy hardcover edition of Poe’s tales and poems. If you already know some Poe it will enhance your reading, but it’s not absolutely necessary to get the story.
I hope I could give you a notion of the book without being spoilery, and that I got some of you intrigued so that you’ll buy and read it. I’d love to have people to discuss it with 😉